An angry mob of “woke” thugs burned American flags and shot fireworks at the home of Shelby County District Attorney Amy Weirich on Independence Day. And most of the protest was live-streamed on Facebook. Click here to watch. 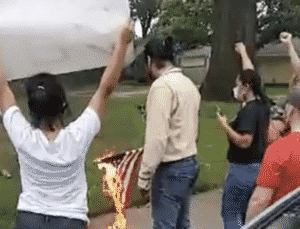 He then ordered people to use their cars to block off streets in the subdivision.

“Folks are going to have to talk to our marchers to get by,” he said. “You either come with us or go in the house.”

Video also showed the protesters shooting fireworks at the Weirich home. One organizer told people not film it — but KWAM obtained a screenshot.

The mob later gathered up American flags that had been posted along the walkway leading to Mrs. Weirich’s home and they were set up fire. 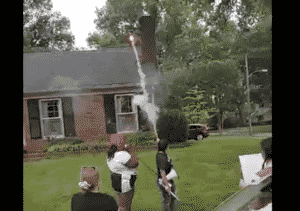 When they heard police approaching the thugs scattered.

“Amy this is a mild one,” a protester said as they fled the crime scene. An ominous warning.

Yesterday, protestors went to DA Amy Weirich’s house, where she lives with her husband & children. And get this … demanded “land be returned to Chickasaw, Quapaw, Choctow & Creek nations.” They burned her property & shot fireworks directly into her home. THIS IS NOT OK!!! pic.twitter.com/cnTwPnu7ct