First Baptist Church in Forrest City, Arkansas was accused over the weekend of racially discriminating a Black family visiting their church.

A woman shared on her social media page the details of how she felt two church members were out of line by first not letting them into the 11 A.M. worship service. She noted that one male member questioned why her family was there in the first place. After not being let in she questioned the other member, an older lady, if everyone was welcome at the church.

To her surprise, the woman claimed the second member said, “we’ve had coloreds here before.” At that point, she became aggravated and said she asked if she meant Black people to which the member emphatically replied, “No, coloreds.” The older member began excusing her statements by saying that is just how she grew up describing black people. 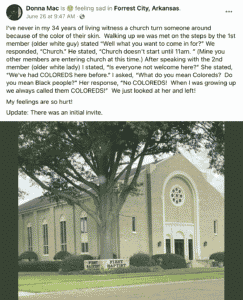 Steve Walter, Senior Pastor, acknowledged that the first step of his church is to fully recognize that the interaction was inappropriate and demands the sincerest apologies.

“The first thing that needs to happen is that this young woman and gentleman need to know and hear an apology, a genuine heartfelt apology from us. We need to express genuine repentance which Biblically is a change of mind, it’s a change of emotion, a change of affection and a change of will.” Walter said.

He also expressed that there is no excuse for the words his members used towards the family, regardless of how they were raised.

“There’s no way that can ever be viewed as acceptable in 2022,” Walter said. “it doesn’t matter generationally what may have been a term fifty or sixty years ago.”
Share This Article