UPDATE: We spoke exclusively with Nina Wingfield, Director of Collierville Animal Shelter. She reported the dog’s owner has been found, and apparently the dog goes by Sam, as well as Todd!

Memphis 901 FC is enjoying its best season to date.  Now, their on the field heroics are being matched off the field! 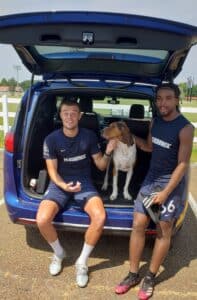 Wake Up Memphis Host and Memphis 901 FC Color Analyst Tim Van Horn caught up with defenders Andre Reynolds & Niall Logue.  The pair were driving to practice Thursday morning when a dog appeared in the midst of rush hour traffic.  As other cars eased by, Reynolds and Logue eased over and coaxed the dog to the safety of the emergency lane.  Unfortunately, the pooch had no tag.  Not ones to ever give up, the lads were able to connect with the Collierville Animal Shelter and the Humane Society of Memphis & Shelby County.

What happened next, including Coach Ben Pirmann’s rection?  Listen to the full story below.